When she was 16 months old, she had a seizure that lasted 90 minutes.

90 minutes that literally took her breath away.

Because she was a chubby, seizing toddler, the medics at the military clinic in Aviano, Italy could not steady a vein to solidly secure a Valium IV to calm the brain. She eventually stopped breathing. No breath. 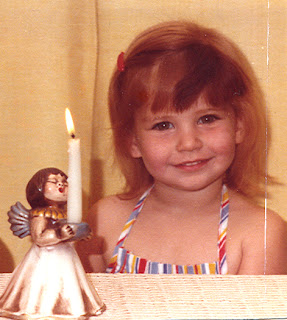 The situation was doubly frightening because we had been in Italy for just a short time, and she was going to an Italian hospital. We were just beginning to learn the language.

After an unbearable few hours, an Italian doctor appeared in the waiting room and told us, through a translator, that our baby was stable.

We agonized in the waiting room for the rest of the night.

She was in the hospital for eight days, during which time it was discovered she had an ear infection. (Info. about febrile seizures here.)

The doctor who kept her alive by way of the straw said he had never seen such a severe seizure, and in one so young, in his twenty years of medicine. He did not think her prognosis would be positive.

As a kid, she loved soccer and climbing trees.  A little scientist already, she enjoyed wrapping string around her fingers until they turned purple; she just wanted to know what would happen.  Her 4th-grade school picture displays a wonderful hairdo that we’ve not seen since.

As a teen, she loved youth group and dinner theater and thought she might be a doctor. She went on two mission trips to Haiti.

When she graduated from college with a degree in chemistry, the doctor who saved her life sent her a personal letter and a Mont Blanc pen. She then taught chemistry and other sciences to high schoolers for 13 years.

A year ago, she left the field of teaching to explore a career in medicine. (Back to those early experiments of what happens when you tie up your digits.) She’s been helping with the caretaking of her grandparents for a decade and has learned quite a bit about patient care. She was my go-to when my parents had bad days, and it was emotionally difficult for me.

She worked at an urgent care clinic for nearly a year – doing Covid testing – and in about 10 days, starts PA school. We are excited to see what the next adventure holds.

Teaching science to, and smooching on, a beloved nephew…

As our only daughter, she must endure the love and silliness we heap on her because of that fact. Bless her intuitive heart. She is a wonderful young woman. A  breath of fresh life.